As a journalist, I always try to keep my opinions to myself in the workplace, on Facebook, and on this blog.  Unless it involves baseball.

Today, though.. a rare op-ed, as I climb up onto my soapbox.  And at the size I am right now, that’s no small task…

OK.  All jokes aside, tomorrow is Election Day in Omaha.  Voters have their first opportunity to narrow down the field of mayoral candidates, city council candidates, and Omaha School Board hopefuls.  But last week, Douglas County Election Commissioner Dave Phipps painted a dismal picture of what he expects on April 2.  He predicts voter turnout will be about 18%.

Here’s the math: of  274,321 registered voters, less than 50,000 will decide who moves on to May’s General Election.  Less than 18% will decide who shapes the public policy of our city for the next four years.  What happens regarding taxes, crime, roads, policy.  Less than 18% will determine who gets to decide on education for kids who attend OPS schools; how THEIR tax dollars are spent in the district.

Imagine being in a group of five people and letting one person decide how your money is spent, what you do, what will keep you safe, etc.  Are you willing to give up that power?

These numbers aren’t anything new.  For the primary election in 2009, Phipps says Omaha saw a 19% voter turnout.  Still, I am so surprised, and DUMBFOUNDED by these numbers.  As I’ve mentioned here before, we receive quite a few story ideas from our viewers, including A LOT of complaints or issues they need help with.  Don’t get me wrong–I’m a proud member of the Seven Can Help team and want to help if we can.  But folks, THIS IS YOUR CHANCE to make your voice heard!! THIS if your chance to help yourself, your community, your business, your loved ones!!  THIS is our process, a privilege our country was built upon!

I’m a working mom.  I get it.  BUT VOTING TAKES SO LITTLE TIME, AND IT IS SO IMPORTANT!  We MAKE time for so many things.. to stop for coffee on the way to work.. to get gas on the way home.. to meet that friend or coworker for lunch.  PLAN out a window of time, 15 minutes, to exercise your privilege!

Click here  to figure out where your polling place is, what you need to bring, or to download a sample ballot.  All of the information you need is right at your fingertips.

‘I don’t know enough about the candidates..’

We truly believe in our slogan ‘More Complete Coverage’ and have done our very best to provide that to viewers in this (and every) election.  Click here to see how each of Omaha’s mayoral candidates responded to 7 questions from KETV.  You’ll also find links to all of the stories we’ve covered about the campaigns, the allegations and our investigations into the truth behind them, and the mayoral forums and debates that have taken place in the past few weeks.

Two of the people in each race, whether it’s for mayor or council or the school board, WILL MOVE ON whether you vote or not.  And you will have little room to complain if you didn’t try to make a difference while you had the chance.

I leave you with a thought before I step down off my soapbox (and by the way, I might need some help doing that..).  In January 2011, I was assigned to cover the effort by native Sudanese to form their own country, an independent South Sudan.  Omaha was one of 8 polling locations across the United States.  The weather was MISERABLE.. sleeting, damp, FREEZING.  But you’d never know it… because the THOUSANDS of people who showed up, by bus, by carpool, some WALKING, were joyous.  They were singing together.  They were smiling.  They were EXCITED.  THEY WERE ALLOWED TO VOTE.  Those thousands of people waited, in that freezing, wet cold for HOURS.. to MAKE THEIR VOICES HEARD. 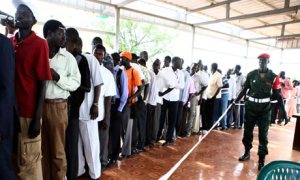 At least think about it.   As Americans, it is our privilege and responsiblity.

Polls open at 8am Tuesday!

4 thoughts on “Climbing Up On My Soapbox”