We are now just DAYS AWAY from a new Husker Football season.

2015 is no ordinary year.. we have a new head coach, a new mentality, a new style.  We lost powerhouse players like Ameer Abdullah and Kenny Bell, but will see new faces like true freshman Dedrick Young, awarded his blackshirt just this week.

A new chapter will be written in the storied history that is Nebraska Football.  Every Thursday, I get to flip back a few pages (or more) and check in with the ‘legends’ of seasons past.

Like last year, I’m hoping to dabble in as many eras of Husker football as possible.  We’ll talk to guys hoping to continue playing in the NFL, guys who pursued other talents after graduation, and guys who built the foundation for decades of moments to come at Memorial Stadium.  This has been one of my FAVORITE series to put together in my career here at KETV, and I can’t wait for another season!  (To see who we featured in the 2014 season, CLICK HERE, or click the Throwback Thursday index tab at the top of the page!)

Who better to kick off 2015 then arguably THE BEST kicker in NCAA history?!?!

Alex Henery, Nebraska’s place kicker/punter who played for the team from 2006-2010, set records not only at Nebraska, but in the college football history books.  He only missed EIGHT FIELD GOALS HIS ENTIRE CAREER.

Think about that for a second… HIS ENTIRE CAREER.

The Omaha Burke grad with the golden foot finished college with an accuracy rate of 89.5%, topping the previous NCAA record of 87.8%.  One kick in particular is STILL in Nebraska record books for longest field goal, a moment that set the college football world on FIRE.

Nebraska was playing rival Colorado to close out the 2008 regular season.  The Buffaloes had just scored a touchdown, putting them up 31-30.  With less than 2 minutes on the clock and a looming 4th down, Coach Bo Pelini called in Henery.

My husband was on the sidelines shooting the game, so I was watching alone at home.  I remember I was putting away laundry, and heard the announcer say Henery was coming in… that his field goal attempt would be from 57 yards out.

I put down the laundry basket, and clung to our dog, Mack, watching to see what would happen.

“The big thing I remember is standing out on mid-field,” Henery told me recently.  “There was a commercial break, Jake Wesch looked at me and said, ‘you’re gonna be famous after this.’ I said, ‘right..'”

Do you remember?!? Click here to watch it all over again, thanks to HuskerAddict!

#37 knew what he was talking about.  The kick went in.  The announcers, 85,000 fans at Memorial Stadium and football fans all over the COUNTRY were in awe.  Nebraska won the game.

“Everyone I talk to, that’s the main thing they talk about,” said Henery.  “They know where they were, who they were high-fiving, and it’s fun to hear people’s stories.”

That one moment was a preview of the consistency and reliability Alex Henery provided for Nebraska. Husker fans reached a point that we knew if Henery was in, the Huskers would put up another 3 points, no questions asked.

That is part of what fuels Henery’s message to this year’s kickers and special teams players at Nebraska.

“Come through in the clutch; that’s all that matters,” said Henery.  “I think the coaches coming in, sounds like they’re great and the guys are buying in.”

He’ll be watching from his hometown of Omaha this season… maybe. After three years playing for the Eagles and Lions, Henery is now an NFL free agent, meaning his phone could ring (and has) at anytime, sending him to tryouts across the country.  In fact, Henery and I had to reschedule our initial interview because he was in Pittsburgh trying out with the Steelers.  Henery was at a charity golf tournament in Omaha when he got the call.

“Had to stop golfing and catch a flight out of town to make the tryouts,” Henery said.  Unfortunately this time around, Henery didn’t get the job.  We talked a little about the differences between college and the pros.. Henery credits great holders and snappers at Nebraska, and notes the business culture of professional football versus the fan adoration and fun many players have in college. 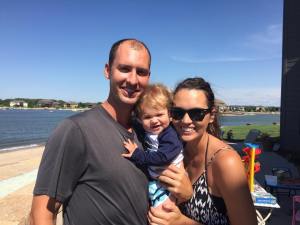 His biggest fans are always waiting for him back in Omaha, his beautiful wife, Johna, and sweet little Landen, who just turned one year old.  How cool will it be for that kid to try on the jerseys hanging in the closet (the Burke High jersey right next to Nebraska and Philadelphia), to look at all of his dad’s plaques and awards from his years as a Husker, and to read all of the cards and newspaper clippings his dad kept as keepsakes?

“College was good to me and I have many good moments to look back on,” said Henery. 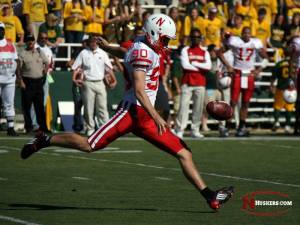 For more on #90 Alex Henery, CLICK HERE to read his official bio from Nebraska Athletics.

One thought on “Time For Kickoff”

For someone out there frustrated and not knowing where to even start….
It’s official. Cutest football player in the history of sports.