Ever meet a person who you just KNOW is going be something big?  They have that IT factor.. how they present themselves, what they give to others, how they make you feel.

I found out about the Miss Nebraska Pageant through a letter I got in the mail.  I went to one of the first Miss Omaha rehearsals just to see what it was all about, and Brook Matthews was one of the first people I saw.  She was so dang fantastic I just about turned around and walked out–I was NOT going to even try to compete against her!  Brook was A STUNNING blonde, perfect body, well spoken, she had the confidence of a CEO and just radiated grace and sophistication.  In a crazy turn of events, I become her pageant sister a few weeks later; Brook became Miss Omaha and I became Miss Douglas County.

Brook was later crowned Miss Nebraska 2004, then went on to  earn her Masters degree in Business from Creighton while founding and developing Omaha Fashion Week.  The event has become the 5th largest fashion event in the country, and last week, Brook Matthews-Hudson and her husband, Nick, opened the Omaha Design Center, welcoming sold-out crowds of thousands.

Brook is a REALLY. BIG. DEAL.

A few years ago, I met a young woman who stood out to me in a group of OUTSTANDING young women.  I invited all of the 2014 Miss Nebraska contestants to the KETV studios to record a special edition of Chronicle to spread awareness about the program and the incredible things these titleholders were doing in their communities.   (Click here to watch the 2014 Miss Nebraska Chronicle special!)  Tosha Skinner made the long drive to Omaha to take part when several of the other western titleholders understandably did not; she was articulate, confident, and I went back to my desk that evening thinking, ‘Dang!! Who is that girl?!?’

Tosha Skinner is a 3-time local titleholder with the Miss Nebraska Organization and the current Miss Heartland.  She’s a UNL graduate and proud Delta Delta Delta alumnae.  She’s a Logistics expert, a volunteer, a Christian, and a woman proudly comfortable in her own skin.

“The most important part of my life is that I live out my platform every day,” Tosha told me recently.  “Because my platform focuses on self-love and living a healthy lifestyle, I think that it is essential I live my life with the values I teach.”

Tosha calls that personal mission ‘Perfectly, Imperfect: Learning to love the true you.’ 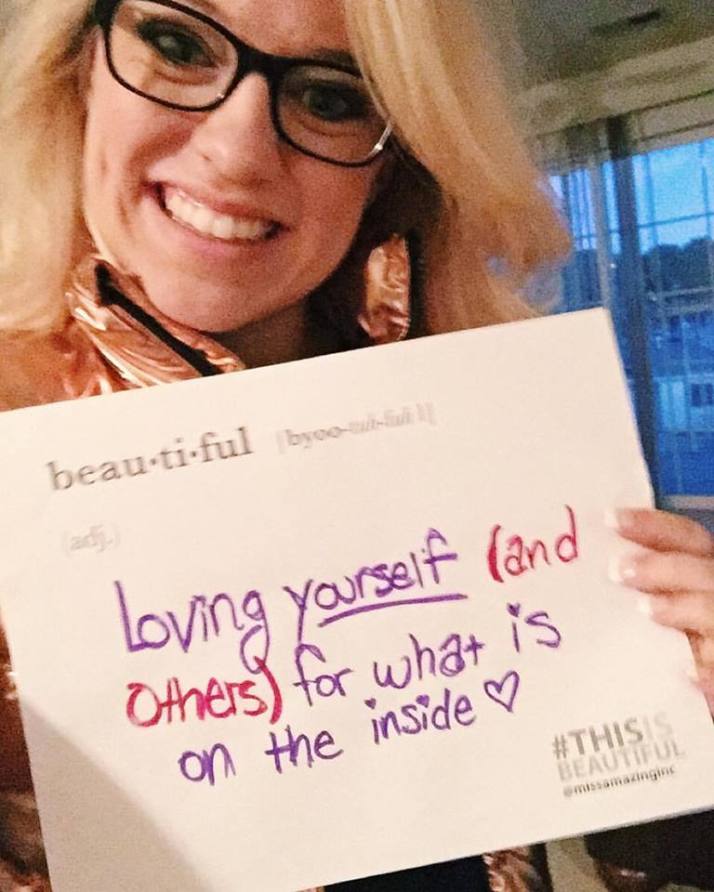 “After years of struggling with low self-confidence, which turned into an eating disorder and depression, I decided to start making changes to my life, which started with the way I viewed myself,” said Tosha.  “I became healthier in the way I thought, spoke, ate and lived.  I watched how each of these things helped me learn to love myself.  I soon realized that if I shared my own story, I could help others come to the same realization I did.  I want to live in a world where my little sister doesn’t have to struggle through the same things I did!”

Tosha has embarked on something of a social media crusade to pump positivity into the world, and to remind women everywhere of their beauty.  She posts inspirational memes, shares terrific photos to make you smile and think, and frequently updates her blog with op-ed like posts focused on image and self-improvement (CLICK HERE to read more!)

Tosha on Facebook: ‘Nothing is more rewarding than knowing you helped create that smile ❤ #missheartland‘

Tosha says being a Miss America titleholder has not only given her an opportunity to share this message, but it’s part of the reason she found that message in the first place.

“I learned about eating right, working out, and how to better understand my own body, and I learned all of that because of preparing for Swimsuit (competition)!” said Tosha.  “The Miss Nebraska system has been an active part of my life.  I learned life skills like public speaking, stage presence, professionalism and living a healthy lifestyle.  It helped me find my passion for volunteering and taught me to step out of my comfort zone every day.  I am a better person because of the Miss Nebraska system.” 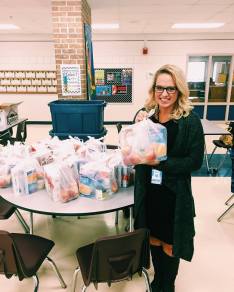 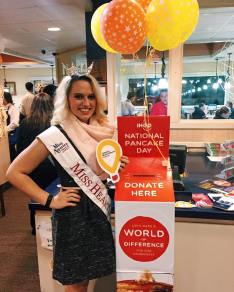 And despite having a full-time job at Talent Plus in Lincoln, Tosha is an active proponent for that same organization, taking part in philanthropic events across the state on a weekly basis, if not more often.

Tosha’s raised awareness for Alzheimers, for Team Jack and pediatric cancer research (CLICK HERE to learn more!), for Junior Achievement, for Children’s Miracle Network, and for the American Heart Association. She says her dream is to turn her platform into a non-profit to reach even more people.  This is the work of a determined, selfless young woman.. a far cry from the self-described shy, unsure little girl she once was.

Tosha Skinner is a Husker, a working woman, a friend, a mentor.  She’s a volunteer at People’s City Mission and a superhero at the Lincoln Children’s Museum.  She’s Miss Sugar Valley 2014, Miss Chadron 2015, Miss Heartland 2016.. and she’s ready to be Miss Nebraska.

“Being Miss Nebraska is more than just a pretty crown and sash,” said Tosha.  “It is about being a role model to both children and adults, presenting the best version of yourself every day, and most importantly, being the best possible representative for Nebraska.  It’s waking up every day with a smile, being prepared for anything the day may bring.  And it’s about utilizing the moments that you can touch someone’s life, with a smile or conversation.  This is the year I am prepared for.”

WANT TO LEARN MORE ABOUT TOSHA?

Side A: Season 1 Finale: Questions about the way things are? - Question Marks