There’s something special about swimmers..

These athletes are just wired differently than n0rmal human beings.  They’re up at 4am to put in hours at the pool.  They are SHEER musle and strength.  They don’t know failure, because when they’re not focused on the swimmer in the next lane, they are constantly racing their OWN clocks to top their personal bests.  All of these traits; dedication, health, perfection, also seem to translate to swimmers’ lives outside the pool.

Before Melissa Fry was our 5pm anchor and one of our best reporters, she was the 2001 state champion in the 100m butterfly at Millard South High School (Melissa and her dad are the first father/daughter state champions in swimming!)  Melissa is still in the Patriot record books for several strokes, and went on to swim at Illinois State before transferring to the University of Nebraska-Lincoln. 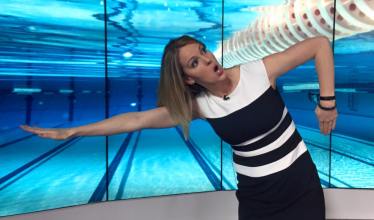 Before Alex Hoffman was our First News anchor, she was nothing short of a legendary swimmer in her home state of South Dakota.  In high school alone, she won four individual state titles.  At South Dakota State, Alex’s list of school records and career wins is TWO FULL PAGES LONG.  I’M NOT KIDDING.  She broke 9 school records her first season, was team captain her senior year and chosen as an NCAA Woman of the Year nominee.  Alex was also Miss South Dakota 2008 and a Top 10 finalist at the 2009 Miss America pageant.

Before Alexandra Stone became our First News Weekend anchor (and one of our star reporters!) she was swimming year-round for both school and club events, starting when she was a toddler.  Alexandra made the varsity swim team as a freshman, excelling in the 100M backstroke. 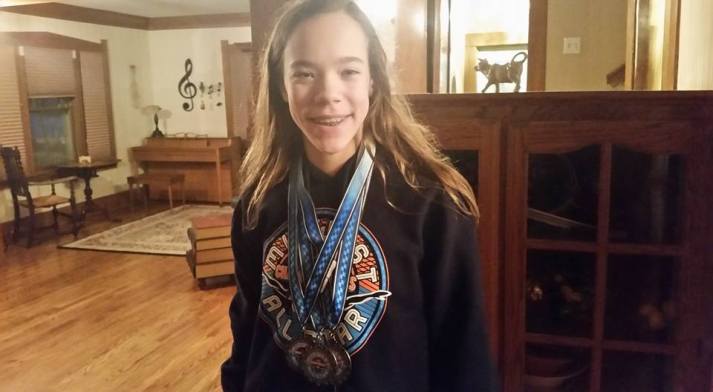 This INCREDIBLE young lady, Jojo Randby!  Jojo’s mom is Emmy-Award winning journalist Julie Cornell, and her dad is our Chief Meteorologist Bill Randby.  Jojo is making a name for herself.. representing Nebraska in the midwest regional 5-state All Star meet, where she won the 50m and 100m breast, clocking personal record times in both!

NONE of this is easy.  ALL of these ladies say they swim or swam 6+ days a week, often twice a day.  This all comes in addition to school, volunteering and other activities.

“I’ve had a crazy swim season that just concluded with the state meet,” Hannah told me last month, after qualifying for two events at state as a sophomore.  (CLICK HERE to watch Hannah set a new personal record in the 100m butterfly in January!)  Hannah’s also a dancer.  And she works part time.  And she’s a student at Elkhorn High School.  And she’s Miss Omaha’s Outstanding Teen.

Hannah spends almost three hours EVERY DAY swimming, in addition to everything else she’s got going on in her life.  How, and WHY add a crown and sash to the mix, and commit to competing for Miss Nebraska’s Outstanding Teen in June?

“I got involved in the MNOT program because I love the values that it promotes: service, scholarship, style and success,” said Hannah.  “I have such respect for the titleholders who are volunteering in their communities and are role models for everyone around them.”

Hannah has also held the titles of Miss Nebraska Pre-Teen 2012 (ANTSO), America’s US Miss Nebraska Teen 2014, and as Miss Nebraska Junior Teen 2014 (ANTSO) she was named National Junior Teen 1st Runner-Up and National Spokesmodel winner for 2015.  Complete disclosure.. I know very little about the America’s National Teenager Scholarship Organization, but it seems Hannah knows what to prioritize as a new contestant in the Miss America’s Outstanding Teen club.

For starters, her volunteer work ties right back to where she’s most at home.. in the pool.

“My platform is ‘Safe Splashes’, combining my love for the water with my passion for working with young children,” said Hannah.  “Drowning is the leading cause of accidental death in children between the ages of 1 and 4.  According to the CDC, in 10% of those drownings, the adult will actually be watching the child with no idea it is happening!  While complete ‘drown-proofing’ does not exist, parental water safety education and early childhood swimming lessons can reduce the risk of drowning.”

Hannah is hoping to make a difference both with with her words and action; she works part-time as a swim instructor, teaching kids and parents exactly what she promotes as Miss Omaha’s Outstanding Teen.  She’s also volunteered to read for local students, to ring bells for the Salvation Army, she’s been part of the Bid Buddy/Little Buddy mentoring program and helped as a math tutor. 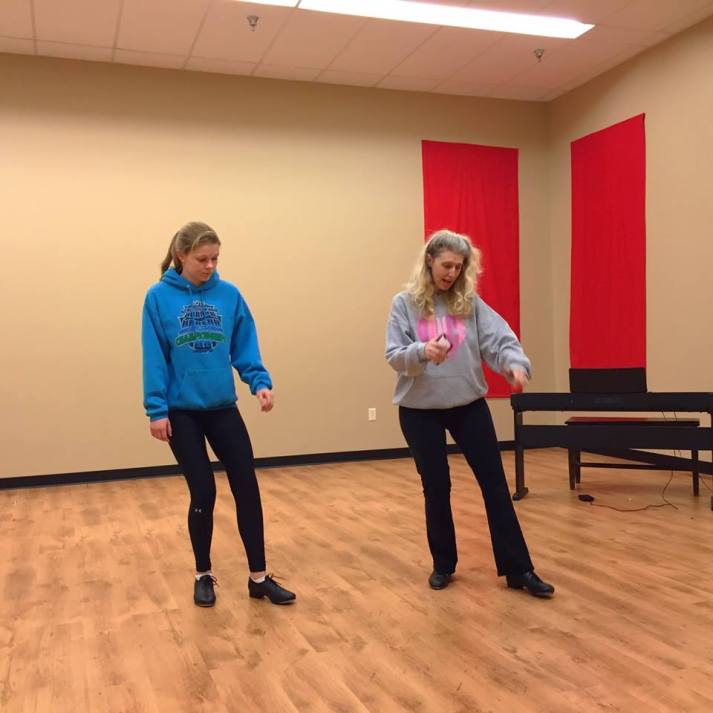 “I combine my two favorite dance styles (jazz and tap) into a fun, upbeat routine that I absolutely love to perform,” said Hannah.  Hannah also loves her family (just below, she’s emceeing part of Nebraska’s Miss Amazing pageant with her dad, Jim!) and friends, and says those relationships along with school are most important to her in her life. 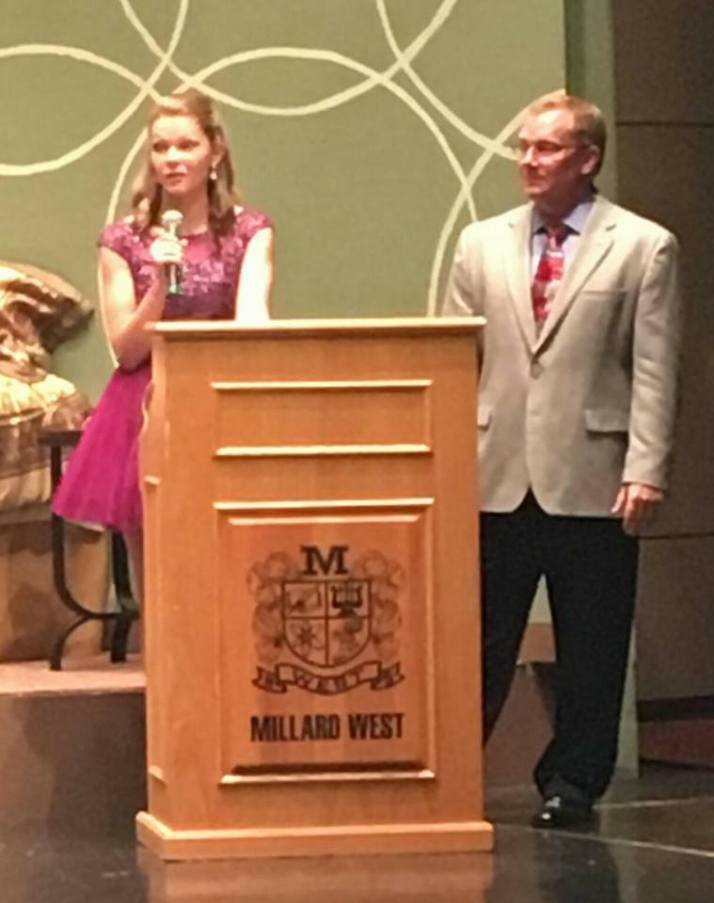 “From an early age, giving back to the community and volunteering have been important to me, so I look for role models who are reaching out and making a difference in real ways each and every day,” said Hannah.

Now, this 16-year old hopes to become a role model for someone else, and notes that her pageant-background has propelled her forward.

“I tell people about the community service I have become involved in through pageantry and the self confidence it takes to walk and talk on stage,” said Hannah.  “When I applied to be a swim instructor at the age of 15 I was interviewing with candidates that were as much as 6 years older than me.  I got the job because of the confidence and poise I had in the interview.  My ability to speak honestly and confidently to parents about their child’s progress earns me respect as an instructor.  The skills of communication and confidence are directly related to my involvement in pageantry and I am proud of that.”

And now, Hannah Miller wants to take her journey one step further as Miss Nebraska’s Outstanding Teen.  After all, she’s a self-described well-rounded over-achiever.  If you ask Melissa, Alex, or Alexandra… I’m pretty sure that’s synonymous with SWIMMER.

“I have been preparing to represent our great state for some time now and I know I am ready to step up and be the best possible representative nationally for Nebraska,” said Hannah.  “I am a genuine person who connect with people easily and I have the ability to help make a difference.”

For more information about the Miss Omaha/Miss Douglas County’s Outstanding Teen Pageant, visit THEIR FACEBOOK PAGE or THEIR WEBSITE.  For information on becoming a contestant, contact Director Kelsey Ellis by email at omahadouglascountyOT@gmail.com.