Sheridan Blanco, Makinzie Gregory and Carsyn Long were just little girls when Gering’s Teresa Scanlan made history as Nebraska’s first Miss America. Now, all three will compete for the title of Miss Nebraska, hoping to bring their hometown a second Miss America crown. Blanco, Gregory and Long, all 2018 Gering High graduates, will compete at the 2019 Miss Nebraska competition in June in North Platte.

Blanco, 19, has already won thousands of dollars in cash scholarships competing in the Miss Nebraska program, including a $2,000 scholarship to Western Nebraska Community College, where she is pursuing a degree in physical therapy. Blanco was crowned Miss Scotts Bluff County 2019 over the summer, and has since volunteered at events across Western Nebraska advocating for causes including Special Olympics, Children’s Miracle Network Hospitals and sharing her personal message about Arthritis Awareness.

“The Miss Nebraska Organization has been a very rewarding program to be a part of,” said Blanco. “I have learned public speaking skills, how to promote myself, and am able to go to college for free all because of this organization.”

Gregory, 19, has won more than $7,000 in cash scholarships competing in the Miss Nebraska program. One of the youngest contestants at the 2018 state competition, she was named 2nd Runner Up, honored with a Preliminary Talent Award, and named a finalist for the Miss Nebraska Community Service Award. In addition to volunteering across Western Nebraska, Gregory is an active social media advocate for individuals with special needs, serving as Miss Kool-Aid Days 2019.

“I am so excited to represent all that I stand for in the Miss Nebraska competition this year from my spiritual beliefs, to my hometown and state, to various social issues, organizations, and businesses that I have become involved in!” said Gregory. “I am grateful for the voice and platform that the Miss America Organization gives me to advocate for my chosen causes!”

Long, 19, is currently a student at the University of Alabama on a full-ride scholarship she earned by winning the title of Miss Nebraska’s Outstanding Teen 2017. Long travelled the state performing for various events, speaking to schools and organizations, and volunteering for a variety of causes. Long, whose parents now live in Bennington, was crowned Miss Douglas County in October, and has made frequent trips back to Omaha to promote foster care and Children’s Miracle Network Hospitals.

“It’s so incredible that Gering gets to be represented in this way, and it’s even more incredible to have such successful and esteemed young women representing it,” said Long. “We have seen each other’s successes throughout high school and it’s exciting that we get to continue to see each other’s success at the Miss Nebraska competition this summer. I am confident that any one of these young women would execute the job of Miss Nebraska so eloquently and beautifully! Our program truly does encourage us to be the best version of ourselves. We become advocates for causes larger than ourselves. We strive to achieve our educational goals in receiving cash scholarships. We evolve into the women that Nebraska truly needs.”

Yellow is the perceived color of sunshine. It is associated with joy, happiness, intellect, and energy.

Have you guys ever seen the Lego Batman movie? That part when Alfred tells him he has to go to Commissioner Gordon’s retirement party, and Batman just doesn’t want to?

Yeah. Click that. Because that’s how I feel about saying goodbye to our Yellow, our sunshine, Miss Nebraska’s Outstanding Teen 2017 Carsyn Long. 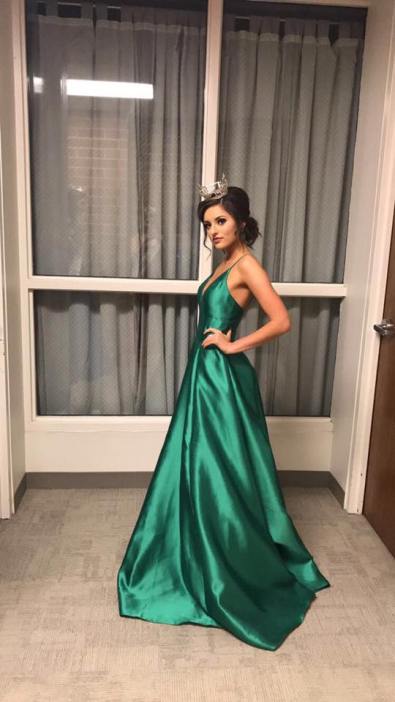 When you are around a person like this, do you just KNOW they are destined to be something amazing? Carsyn Long is a young woman who isn’t just good at everything she does, SHE IS OUTSTANDING. 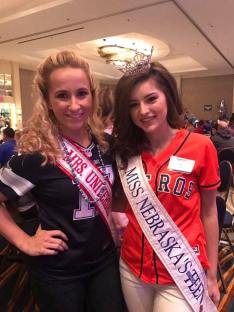 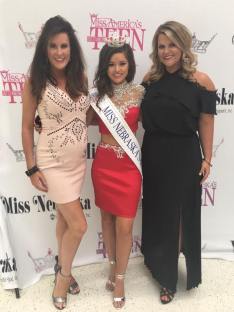 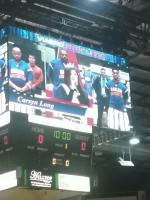 Carsyn has won state championships and other honors in DECA, competitive speech, and theater. She is a gifted singer, performing for the Harlem Globetrotters and winning the Overall Talent Award at last year’s Miss Nebraska’s Outstanding Teen competition. She is confident and well-spoken, nailing live TV interviews repeatedly in the last two years. She is a woman of faith, a strong advocate for her church youth group in her hometown of Gering. She is SMART, winning a full-ride scholarship to the University of Alabama, in part because of her Miss Nebraska’s Outstanding Teen resume. And she is kind, voted Homecoming Queen by her peers, a woman with a proven servant’s heart at just 18 years old.

The Miss Nebraska’s Outstanding Teen program was created for women like Carsyn Long. She’ll pass on that title tonight, crowning a new state titleholder in Omaha.

“As I’m preparing to give up my MNEOTeen title, it’s pretty bittersweet,” Carsyn told me. “This has been such an emotional, humbling, and gratifying year that I am dreading to see come to an end. Honestly, I wish I could be MNEOTeen forever! Of course, I am so read for the college experience (Roll Tide) and to start my adult life, but it’s still so hard to say goodbye to something that has consumed my life (in all the best ways) for an entire year.”

When Carsyn was crowned one year ago, she was closing out her junior year of high school. Immediately, still focusing on finals and state championships, she also turned her attention to preparing to represent our state at the Miss America’s Outstanding Teen competition in Orlando, Florida.

“One thing I remember so vividly (and I pray I never forget this moment), was the very first night of prelims,” said Carsyn. “We marched through the auditorium aisles with our state flags. The music was blaring and the screams of the audience were just deafening. I got to my spot on stage and I saw the big Husker N’s in the audience and could hear my family cheering for me. It took everything I had to not start bawling. I remember thinking to myself, ‘This is real life. This is happening. I’m the girl from Nebraska who gets to experience this.’ It was very surreal and so emotional. I was so in awe and so grateful that I was the girl that got to stand on this stage. I felt so humbled, because I knew how many people would have loved to be in my shoes that at moment.”

Carsyn did not take the national crown, but she did take away several incredible friendships.

“I literally talk to Autumn Arsenault from Tennessee everyday, she’s one of my best friends,” said Carsyn. “Mississippi’s Outstanding Teen, Holly Brand, is my college roomie. I love her to death; we really hit it off in Orlando and we’re now forever best friends.”

Carsyn also came home with a resolve to make the absolute most out of the title she had already earned, our Miss Nebraska’s Outstanding Teen. She threw out the ceremonial first picture for the Omaha Storm Chasers. She was a featured performer for WOWT-Omaha’s live fundraising telethon, and at the annual Crowns & Gowns weekend in North Platte. She’s emceed local pageants across the state throughout the year, and volunteered her time at Children’s Hospital and Medical Center. Carsyn will also be part of the Annual Cattleman’s Ball in June. She has also distributed her Blessing Bags to children across the state, reminding them they are loved and valued.

“I have done a TON of traveling this year,” said Carsyn. “A lot of my events were somewhere like North Platte or Omaha, which can be quite a drive since I am from western Nebraska, basically Wyoming! Most of my appearances, I drove by myself. It hasn’t been easy juggling everything this year, especially my senior year. I have had to sacrifice a lot in order to make it work, but it has all paid off. It was really imperative that I knew which things were most important.” 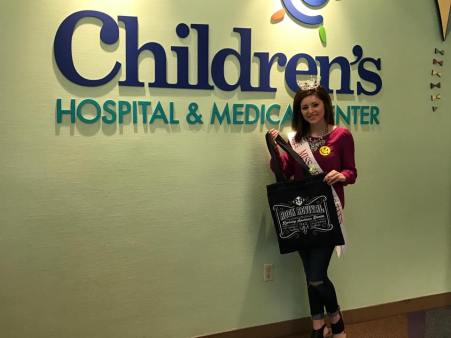 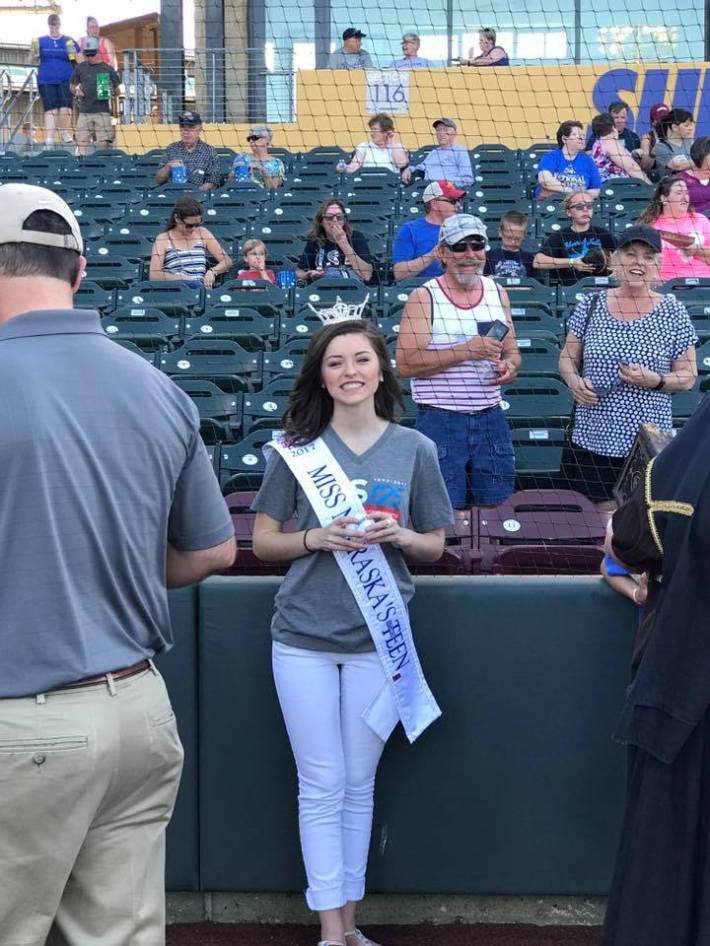 “I had been feeling really stuck when thinking about life after handing down my title,” said Carsyn. “Obviously, I’d go to college and what not, but I had been wondering, ‘how am I going to continue making my mark?’ But I’ve realized because of this program, being Miss Nebraska’s Outstanding Teen and my drive to succeed, I am so capable and equipped with everything I need to continue moving mountains.”

And by being Miss Nebraska’s Outstanding Teen, Carsyn was eligible for a full-ride scholarship to the University of Alabama. She found out over Christmas break that the she was accepted, and that every dollar of her higher education, an estimated $115,000, would be paid for.

“In August, I’ll be heading to Alabama to pursue a degree in news media,” said Carsyn. “I’m planning on rushing a sorority to be really involved on campus and meet so many new girls. I’d like to get involved in theatre and performance down south a well. But there’s a lot of things I’m just kind of going with the flow with and knowing that God will provide. I couldn’t be more excited to start this new adventure.”

Will that adventure bring her back to Nebraska someday, to compete for the title of Miss Nebraska?

“I guess people will just have to wait and see… :),” said Carsyn. “Haha, yes, I plan on competing for Miss Nebraska… or Alabama? Most likely Nebraska because I’ll always be a Husker, even if I do come back with a Southern accent.” 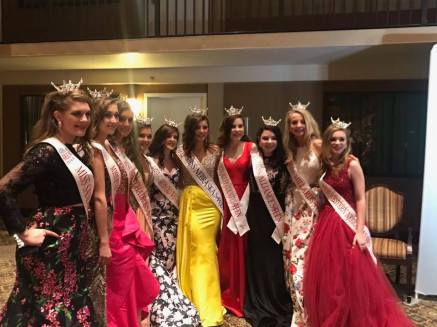 To the 19 young women competing to follow in Carsyn’s footsteps, and to everyone learning more about the program that has been such an important part of her life, Carsyn has a message.

“I wish you could meet 14-year old Carsyn, compared to Carsyn now,” she said. “I not NOT exaggerating when I say that this program has completely transformed me into a different young woman – in the best ways possible. I can no excel in interview for a job or scholarship without hesitation. I take the health and wellness of my body very seriously and have more knowledge of how to have a healthy mind, body and spirit. I know that God has provided me with a voice that I have no problem in utilizing and performing with. I can be proof of the idea that even though you are young, you can accomplish amazing things.” 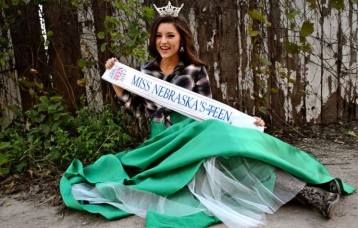 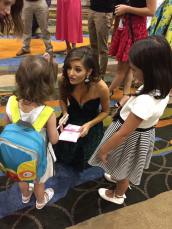 “My year has been all about small moments,” said Carsyn. “You make the biggest impact in the smallest moments. People aren’t going to remember what songs I sang at Crowns and Gowns or what I wore at Miss Nebraska week, but they remember how I presented myself and how I made them feel included in my journey. That is something that has been really important to me this year and I plan on continuing that legacy no matter where I go.”

“I knew this was something that God made me for and boy, did He use me this year,” said Carsyn. “This may feel like the end, but it really is the beginning of the rest of my life. I will never take for granted the year I had as Miss Nebraska’s Outstanding Teen 2017. I have been so inspired and motivated by Nebraska communities and I couldn’t be more appreciative. I can’t believe this is it. I can’t believe I was the girl that got to experience this amazing year. I am forever thankful to be Nebraska’s girl.”

Carsyn, you are our Yellow. You are joy, happiness, intellect, and energy personified.

You will forever be our Miss Nebraska’s Outstanding Teen.

To learn more about all of the 2018 Miss Nebraska’s Outstanding Teen contestants, click here.